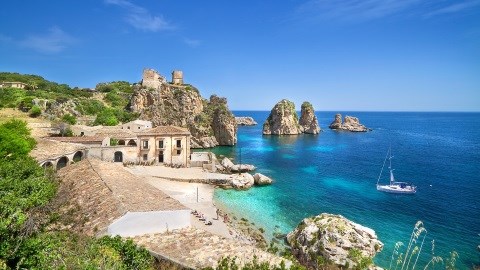 The white sandy beach of fine, crystal clear the water of a sea of changing colors, the harmony of colored d'ibisco plants, oleander and flourishing bougainvillea mingle with the scents of jasmine and cous-cous ... this is San Vito Lo Capo ! Sincere hospitality of the inhabitants, The welcome, the local cuisine that has made ​​the couscous dish which is dedicated each year the international food and wine event "couscousfest" and the friendliness of tour operators who have invested their mark on business accommodation in a relational tourism they did know and appreciate San Vito Lo Capo in the world. The country with its low white houses having had a decent building development over the years has maintained in every way the type of fishing village that was at one time.

Distance from Trapani just 38 kilometers from Palermo and about 100 San Vito Lo Capo insists on a bay with shallow water and quiet between the Zingaro Nature Reserve and that of Hood.  San Vito Lo Capo defined Gaia-of-pearl Coast is not in any case the only wonder to discover in this pristine stretch of the western Sicily Coast as Macari (a small village 3 km) with the view of the sunsets among the most exciting in the world the Gulf of Cofano and Castelluzzo (other fraction to 9 km) with its many coves and small pebble beach in front of the Gulf of Hood help make enchanting scenario that presents itself to the tourist who is going to live in SanVitoLoCapo a relaxing holiday. Not lacking in any way, for those who like to spend their vacation in a more intense way, the possibility to make excursions and trekking to the Zingaro Nature Reserve, visits to the nearby archaeological sites of Segesta and Mothya (to name a few), boat trips, courses sailing and diving etc ..

Between history and legend ... 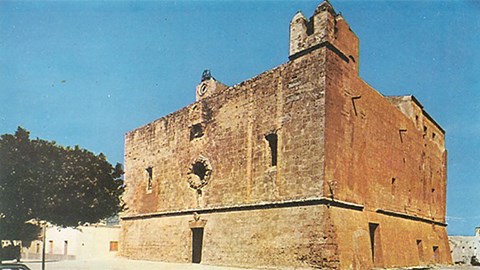 Of human presence in San Vito Lo Capo you have evidence dating back one thousand years BC thanks to some finds recovered inside the numerous caves in the cliffs obtained that abound the coast.Other remains of underground burials dating from a later period also confirm the presence of a permanent nature settlements.The history of San Vito Lo Capo is linked in any way to San Vito Martire , a young nobleman born in Mazara in 286 AD by idolatrous father and Christian mother died a few days after his birth. The left motherless, Vito was raised by his nurse Crescentia Modesto began that together with the tutor the child to the practice of Christianity until it baptized.

During the persecution by Emperor Diocletian, the young Vito was forced to leave his native city at night escaping by sea with Crescentia Modesto and finding refuge in the bay at Cape Egitarso [current Capo San Vito].Here he continued his work of evangelization by converting to Christianity the local population, but later also had to run away from Cape Egitarso and resume along with the two educators his travels that took him from Sicily to Campania and Lucania performing various miracles. Vito died very young on June 15, AD 299 (or 304 AD). The increasing number of devotees to Vito Martyr erected a chapel which has seen over the centuries numerous construction projects for expansion and consolidation up to transform the current Sanctuary-Fortress(frequent pirates pirates that raged at that time imposed this type of construction ) aimed at protecting the pilgrims who came there to worship the Saint. In the eighteenth century San Vito Lo Capo was surveyed at the behest of the Royal Government that gave land to anyone intended bonificarli and with the obligation of residence. The jurisdiction of Erice which SanVitoLo Cape was part so divided the territory into three distinct villages to live, were born as San Vito Lo Capo , Macari and Castelluzzo. It took another 150 years for you to San Vito Lo Capo became divorced from Erice becoming independent municipality through a regional law of 1952, thus was born the City of San Vito Lo Capo and annexed hamlets of Macari and Castelluzzo.