Hike in Province of Trapani

Starting from San Vito Lo Capo you can make many excursions in the Province of Trapani. A Naturalistic itinerary could be a visit to the Zingaro Nature Reserve just a few kilometers from San Vito or the lagoon Stagnone just before reaching Marsala. An archaeological itinerary is the visit of the Temple of Segesta and its Amphitheatre as well as the Acropolis of Selinunte with its Temples.

The city sits on a narrow peninsula in the shape of a sickle that the legend wants to be that of the goddess Ceres put abandoned in this place to go to look for her daughter Persephone. Originally the village of sicani called Drapano (Drépanon by the Greeks), became an important maritime and naval base of Carthage airport. Conquered by the Romans in 241 BC, slowly declined for several centuries, until the commercial recovery under the

Arab rulers (the ninth century) and Norman (1077), which followed the remarkable Aragonese constructive activities, from the end of the thirteenth century. Fortified in the sixteenth century by Charles V of Spain, he continued to enrich themselves, especially the salt trade. Passed in the eighteenth century to the Bourbons, was among the first Sicilian cities to revolt against their government, in 1848. In today's cities is easily recognizable the medieval core (Arabic), the typical maze of lanes and dead ends, which is located in the center of the city.

In the old town there are many eighteenth century buildings: one of the most remarkable monuments are noticed the Sanctuary, with fourteenth-century facade, baroque bell tower and inside the Chapel of the Sailors (XVI century) and the Madonna of Trapani, (XIV century); Palazzo della Giudecca, the early sixteenth century, the Church of Santa Maria del Gesu, the Gothic-Renaissance façade, with a terracotta by Andrea della Robbia; The Cathedral, 1635. The Regional Museum Pepoli exhibits among other things a sculpture by Antonello Gagini (1522), a painting by Titian and archaeological finds from the territory; in the Tower of Ligny (erected in 1671) houses the Museum of Prehistory; Fardelliana the Library preserves illuminated manuscripts of the XIV-XV century and valuable etchings and Dovecote Aragonese castle built to protect the city. Good Friday is the traditional procession of the Mysteries.

Dell 'ancient city founded by the Elimi and destroyed in 306 BC the Carthaginian work can still admire the Doric temple dating from the fifth century BC and the Theatre partially excavated in the rock (second century BC).

Characteristic village on Mount Erice from which it took its name from the cobbled streets and stone houses that made it unique in Sicily. Since the early 60's at the behest of Antonino Zichichi Scientist is home to major international conferences at the Centre for Scientific Culture "Ettore Majorana". The Cordici Museum hosts an important archaeological find found in a Erice's necropolis: a Head of Aphrodite dating from the fourth century BC. Architecturally interesting Mother Church, a building dating back to '300 years and the Venus Castle (XII-XIII century).

Founded by the survivors of the destruction of Mothya by Dionysius (The Tyrant of Syracuse) called Lilybeo (the city that view Lybia, this was the name that was given to Africa) which later became Marsala with the arrival of the Arabs around ninth century who did flourish the business activities due to the large port (Arabic marsa [port] wings [large] Marsala making it one of the largest strongholds of Sicily. 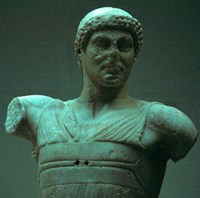 Around the twelfth century BC, merchants-Phoenician sailors had to believe Mozia (or Mothia Motya) morphologically favorable for a landing point so that it becomes a commercial basis for the exchanges that took place in the Mediterranean. It was a Phoenician colony until the siege of the tyrant Dionysius of Syracuse took place in 394a.C. which completely distruse the city forcing the survivors to retreat to Sicily thus founding Lylibeo [Marsala].

Founded in the seventh century BC, Selinunte, located in south-western Sicily, soon it became one of the most prosperous and populous cities of Ancient Greece.Ancient Greek city are preserved the ruins of the Acropolis and the Doric temples that, not being known to which god they were consecrated, are marked with a letter of the alphabet (A, C, D, E, F, G). In the picture, the Temple E, located east of the city.

Island located off the northwest tip of Sicily, between the Tyrrhenian Sea and the Sea of ​​Sicily; is the principal of the Aegean archipelago, is 17 km from the province of Trapani. Mostly flat, but affected by a mountain ridge that touches 314 m in Monte Santa Caterina. In the coasts there are numerous caves, inhabited in prehistoric times, as attested by various finds therein rinvenuti.La economic base is fishing in early May you make tuna fishing (The Slaughter) bloody spectacle, but of incredible charm.

It 'a historic fishing village, overlooking the emerald sea of ​​the nearby Bonnet Reserve, nestled in the gardens of the Mediterranean, at the foot of Mount Erice. It is home to an ancient tuna fishery, recently restored; one of the last tuna fisheries in the world, where you can still practice, in the months of May and June, the traditional ritual of slaughter.

The urban center born around the Sanctuary of the Madonna di Custonaci, a pilgrimage already in the fourteenth century is characterized by typical buildings Baglio [residential areas with courtyard]. Of geological interest are the caves scattered throughout the territory from the Monte Sparacio Mount Hood one of all the Mangiapane Cave karst and theater every year an original "felt" representation of the Nativity. The extraction of Perlato di Sicilia by the numerous marble quarries in the area is the main resource for the country's economy.